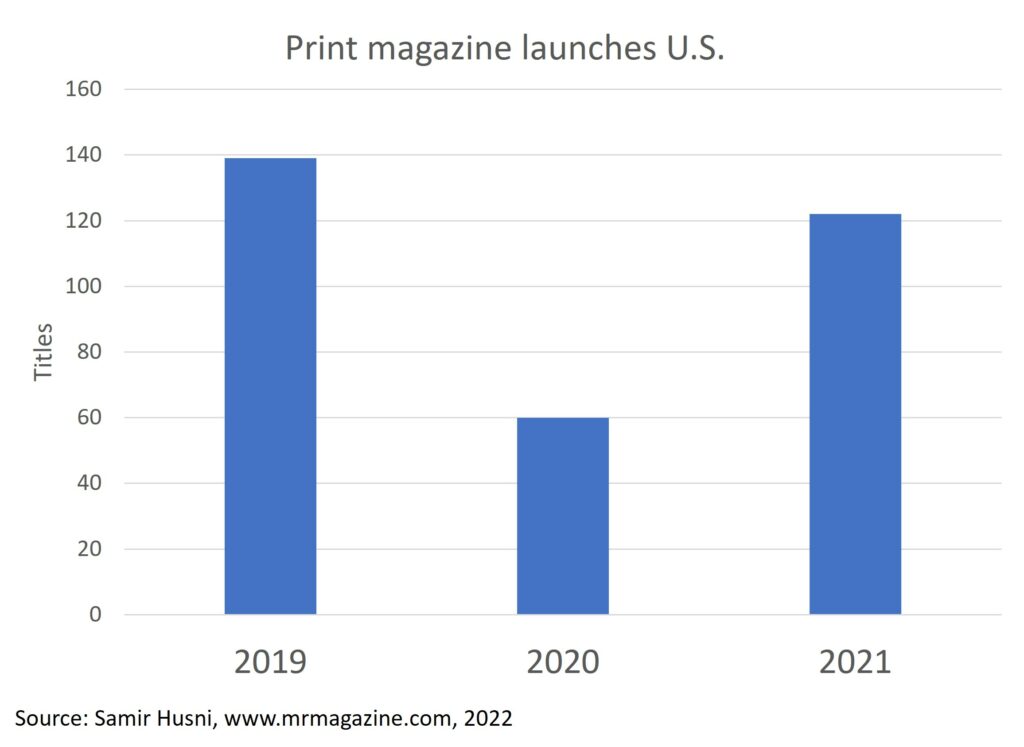 Husni has been tracking magazine launches annually for 43 years. The 122 print magazines launched in 2021 are close to 139 in 2019 and 124 in 2017. Although this is way down from the golden ages before the internet achieved mass adoption (333 titles were launched in 2000), it is a sign that publishing of print magazines is a lively market, but different from what it used to.

Interestingly there were a couple of re-launches among the 122 titles. Seems that publishers have learned that a digital presence is sometimes not enough. Some launches in 2021 were more daring, like an US issue of Italian fashion magazine with a page count 400 pages!

Most of the new launches have something in common: they are niche-oriented and often have low frequencies — quarterly or bimonthly. By relying less on advertising but on circulation revenue, they also follow a general trend in print publishing. Accordingly, the magazines have high cover prices, and they are printed on high-quality paper, underscoring the print positioning itself as a premium media channel.

Technology is helping to cater for short run, niche titles. Make-ready and waste came down a lot on traditional presses. Inkjet is even better suited for short runs and print quality and paper latitude is getting there as well. Ink costs for glossy, high coverage magazines might be something to watch out for, however I doubt that the digital print opportunities are sufficiently considered by existing and would-be publishers.

The times of mass magazines are gone, however serving niche interests can be rewarding – which probably large, traditional publishing houses are not that well equipped to serve. Prepress and print capacity are much easier to come by these days, giving upstart publishers a chance to get into printed issues and most likely responsible for doubling the print magazine launches. I am sure that these magazines will find their readers – if printer can find the paper to print.

Published on:10. February 2022 Category: Blog No Comments on Print Magazine launches doubling – chart of the week

END_OF_DOCUMENT_TOKEN_TO_BE_REPLACED
Published on:13. January 2022 Category: Blog No Comments on Popular in the pandemic – Google searches analysed

Starting into the new year is a good time to have a look at the European print production developments in 2021. For the full revenue data to trickle in we have to wait several months – even for the first countries to report. The full data on Eurostat might be even two years out as Eurostat just about managed to publish 2019 revenues now.

The next best thing is to look at the monthly production index data published by Eurostat. Data is now available until October 2021. The best fitting category in the database is “print and reproduction of media” – with print production making up the lions share in that category. The data is based on the average 2015 volumes as being 100 index points. Starting values in the 90s for 2019 shows that print production volumes already declined before the pandemic hit in early 2020. 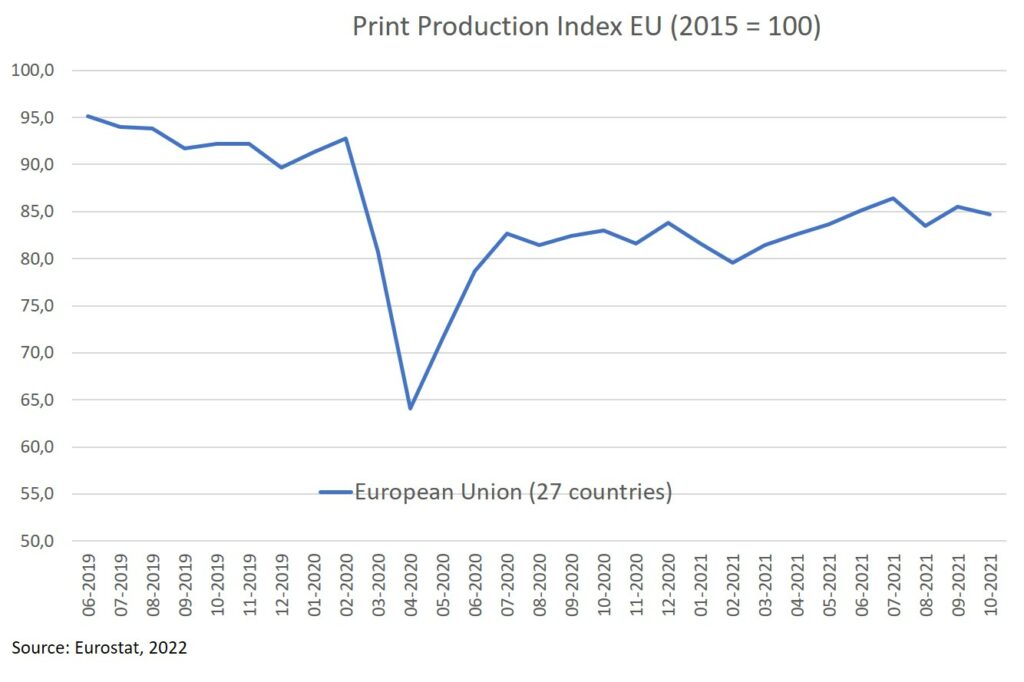 END_OF_DOCUMENT_TOKEN_TO_BE_REPLACED
Published on:7. January 2022 Category: Blog No Comments on European print production 2021 – Chart of the week

END_OF_DOCUMENT_TOKEN_TO_BE_REPLACED
Published on:30. November 2021 Category: Blog No Comments on Is print getting its fair share in advertising?

In the light of distance learning during the pandemic and the move towards digital media in schools there is probably not enough of a discussion on how reading printed books is impacting learning, the joy of reading and consequently the grades. The OECD in sifting through the 2018 PISA study results on school performance published their “21st-Century Readers” report this year, with some interesting findings.

END_OF_DOCUMENT_TOKEN_TO_BE_REPLACED
Published on:26. October 2021 Category: Blog No Comments on Reading printed books is good for you – and your grades – Chart of the week