Finally, the Hunkeler innovationdays are back, not only bringing more inkjet devices, but also a lot of technology around the presses – of course with finishing being very prominent. If you have not been to the Hunkeler innovationdays: it is the event to get the best possible overview on continuous feed production presses. Not only will all important vendors for digital commercial, publishing and document printing presses be there, the event also allows seeing the latest presses printing side-by-side. 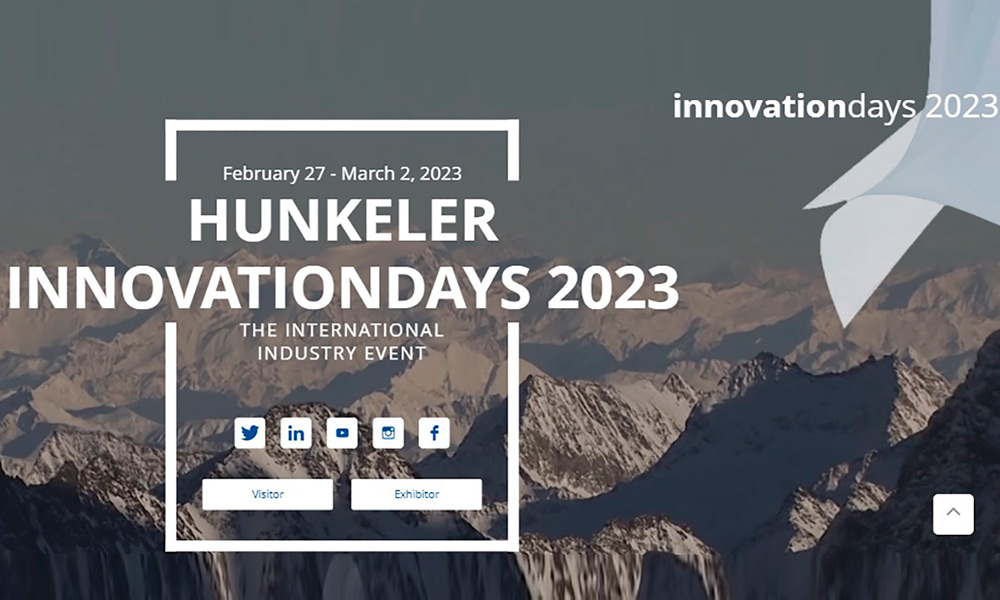 Already in November I had an interview with the new CEO Daniel Erni for WhatTheyThink.com exploring what we can expect this time. The relief is, that not much has changed: presses running and producing sample prints and products. 15 printer suppliers are listed for 2023. The big equipment will all be in Hall 2. There are some new exhibitors, which should make the visit the more interesting. Those are:

For people not able to travel, there is a digital experience, but there is nothing like being there and judging the print output first hand. Since 2003 I am a regular visitor and did see the changes in focus of equipment from transaction print to all kinds of document, publication and commercial applications. After starting as a monochrome toner event these trends resulted in the Hunkeler innovationdays bringing more colour inkjet to the show floor.

Following a four year break it will be good to see the progress made in productivity, quality and automation. As in previous years the Innovationdays will once again take place in the Messe Lucerne exhibition facility. The 2023 event (after two years of cancellations) will run from February 27 to March 2, 2023. Contact me to meet up for a chat or idea exchange.

Hi Ralf, thanks for your insights! Small questions: when you talk about ink jet press installs in 2022, which ink-jet presses do you count under B1/B2? And if you count CF ink jet, do you count towers/engines or do you consider a duplex press with 2 engines as one press? Best regards and best wishes for 2023!

Hi, the answers in short:
press counts depends on the categories. B3, B2 and B1 are counted as single device. For CF installs they are counted as full print lines, which is almost always two engines.
Keep in mind the numbers are based on installations made public and are not the full number of installations. They give an insight which customers are using inkjet and how placements developed when comparing to similar data sets in the previous years.

Published on:27. December 2022 Category: Question No Comments on inkjet placements

2022 started fairly well in terms of inkjet press activities. It was supposed to be a decent year after the pandemic weighed down on businesses in 2020 and 2021. However, sales/placement announcements dropped off in Q2 and Q3. Finally, Q4 2022 sees inkjet press placements picking up finally. It ties in with printing companies having a more positive outlook again, e.g. in Germany.

For years I keep on collecting sales and placement announcements for production inkjet devices and use those to analyse trends and data. Placements and sales numbers for 2022 show a good start into the year with a decisive drop in activity in Q2 and Q3. However, Q4 showed a significant rise in numbers, easily surpassing even Q1 2022. Keep in mind that Q4 has not even ended, so there might be a few more units to add.

The lower activity in the mid of 2022 could be caused by a lack of components and supply chain issues mounting in 2022. This has been confirmed by industry analysts and vendor information. It seems that companies are getting a better handle on it now.

Continuous feed (CF) inkjet remains the main driver in the market and accounted for the largest number of installations again. B1 and B2 cut-sheet presses had a good year, with a bit more even distribution across the year. B3 inkjet presses had a very strong second half of the year, although these devices, not being as expensive as the two other categories, are more likely to fall through the grid.

2022 has not been the year many hoped for in the beginning. War in the Ukraine, supply chain issues, and energy price rises did throw a spanner into many plans. The ad market is surely no exception and the high growth expected had to be downgraded in the year-end reviews coming out now. There were some notable exceptions however as small publishers and traditional media were benefitting in the 2022 ad market climate.

Magna, the central planning unit of global advertising behemoth IPG Mediabrands published its year-end outlook a few days ago. It had some surprising findings. According to Magna’s analysis, the top 15 media suppliers’ share of the global ad marketplace actually contracted two percentage points in 2022 to 58% (and this is not just down to Elon Musk wrecking Twitter). Both, the share for the 3 largest advertising media channels as well as the share of the following 12 largest providers declined, although it does not show all in the chart due to rounding. In any case, it is remarkable as it is the first time that the concentration in the ad market paused!

Additionally, the gap between growth in digital channels and traditional advertising media was down to 6%. This is by far the lowest gap for more than 12 years, where digital was often more than 20% ahead in growth. It is the more surprising as many expected a much stronger push for digital media after the pandemic experience – and this was certainly true for 2020 and 2021.

It is a good sign that the advertising channels are diversifying again. Grown up years ago it still seems unthinkable to me that 3 media suppliers receive almost half of the global ad spending. Only a few years ago hundreds of newspaper, magazine or directory publishers, TV channels, radio stations, mailers and out-of-home agencies competed for their piece of the advertising pie – almost all only in their own territory. Advertising has the power to change people’s minds (otherwise there would not be so much money spent on it), therefore I feel that it is worrisome that so much spending is concentrated on so few players now. More publishers being supported now is good news for more diverse communities. There is some hope as well that spending on social media platforms promoting misinformation is channeled back into quality journalism.

I hope that small publishers and traditional media will not only benefitting in 2022, but that the tide is turning for a more healthy, balanced and diverse media landscape.

Published on:7. December 2022 Category: Blog No Comments on Small publishers and traditional media benefitting in 2022

Pulling out of the depression

The German Federation of the Printing Industry (BVDM) is publishing a monthly overview of the current state and business outlook of the printing industry. November 2022 survey data has just been published and it shows that the printing industry seems to be finally pulling out of the depression that started in early 2022.

END_OF_DOCUMENT_TOKEN_TO_BE_REPLACED
Published on:2. December 2022 Category: Blog No Comments on Pulling out of the depression